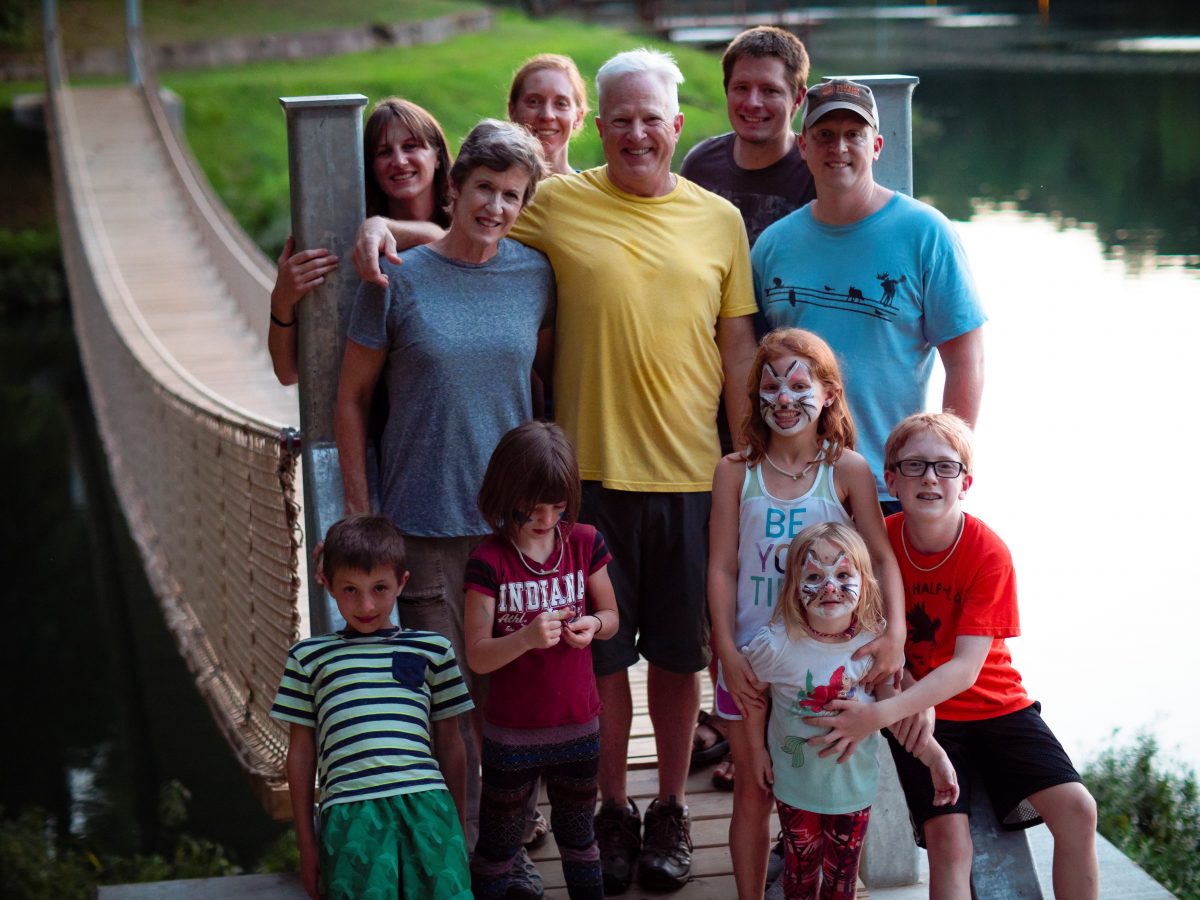 Spencer Goodson with his wife Mary, 2 of his 4 adult kids and spouses, and 5 of 6 grandkids — on a bridge they built for a summer camp where Dr. Goodson went as a camper, counselor, program director, and is now on the Board of Trustees.

Catch up with Spencer Goodson, MD, JD, a graduate of the general surgery residency.

What was your area of surgical focus during your time here?
Survival (as a general surgery resident)

Where are you working now?
I am now an attorney. I finished a vascular surgery fellowship in Chicago in 1987, worked as vascular surgeon until 2000. I was disabled from surgery after a ski accident and cervico-thoracic spine injury. I went to Law School (IU-Bloomington) and graduated in 2005, passed the bar in 2006. I have recently regularly taught IU medical students clinical skills in Bloomington. But I most enjoyed having PG 1 or 2 and PG 4 or 5 Methodist/IU surgical residents as part of my vascular surgery service at Methodist Hospital in Indianapolis.

Reflecting on your time here at UW Dept of Surgery, what do you believe helped you prepare for the surgical career you have now?
During and after my fellowship, I became convinced that the surgical training I received at UW was exceptional–both the didactics and the operative experiences from a committed academic and community faculty, and the challenge just to keep up with very bright, talented resident colleagues. Our chair was Dr. Belzer, who I admired for his commitment to our surgical experience and education and his example as a surgeon-scientist-educator.

What is a fond or funny memory you have that brings a smile to your face when you think about your time at UW Dept of Surgery?
The time the new “UW helicopter” swooped down in a rural yard in Tomah to scoop up an elderly man whose records indicated he had a known stable aortic aneurysm. He was out mowing his yard and yelled to his wife to bring him some Pepto-Bismol for dyspepsia—too much beer. She called the ER because her husband told her his belly hurt. Out went the chopper who then brought him to UW where we wheeled him into the trauma bay, cut off all of his clothes, started large-bore IV lines, and sent him to the CT scanner. Yes, there it was —an unruptured, totally intact, but aneurysmal, aorta. When I left later that day, he was sitting barefoot on a bench outside the ER in scrubs with Maalox all over his lips, holding a grocery bag with his ruined clothes, waiting for his son-in-law to pick him up. You can’t make this stuff up. Let’s just say that it never got reported at Monday’s “M & M.”

When you worked with residents when you were a surgeon, how did you instill the values and lessons learned during your UW Experience to a new generation of surgical trainees?
We used to laugh as residents when we were on call. I’d say to my junior residents, (because my chiefs had said to me) “Call me if you need me, but need me if you call me. And remember, calling is a sign of weakness.” That is funny, for sure (although my kids don’t necessarily think so,) but the “see one, do one, teach one” mantra we lived by instilled in us not only a personal responsibility to learn independently, to assimilate new things quickly and thoroughly, and to form a life-long commitment to improve one’s self as a person-physician-surgeon in order that you can push other young physicians to do the same. The real winner in that effort, is the patient. I told the surgical residents in our Methodist program that if you look back and wondered whether you should go in to see that patient, you should have already been there.

Do you stay in touch with any of your UW Dept of Surgery resident/fellows with whom you trained? If so, who and why?
I have discovered Tim Pohlman works in Indianapolis as a trauma surgeon. Tim was my senior resident on more than a few rotations. He is as smart, as funny, and as capable as he always was. We kidded that today’s surgery resident doesn’t seem as tough as we were. (Maybe a whole lot smarter, just not “as tough.”)

Any other information you would like to include, so we can share to let our alumni know what you’re up to?
Well, as a few of my co-residents might remember, I had the dubious distinction of having the most kids (4!) as a surgery resident. They are all married and now I have 6 grandchildren. I am still happily married to my wife and partner, Mary. (In retrospect, the “toughest” members of the surgical residency—in my memory—were the spouses.)