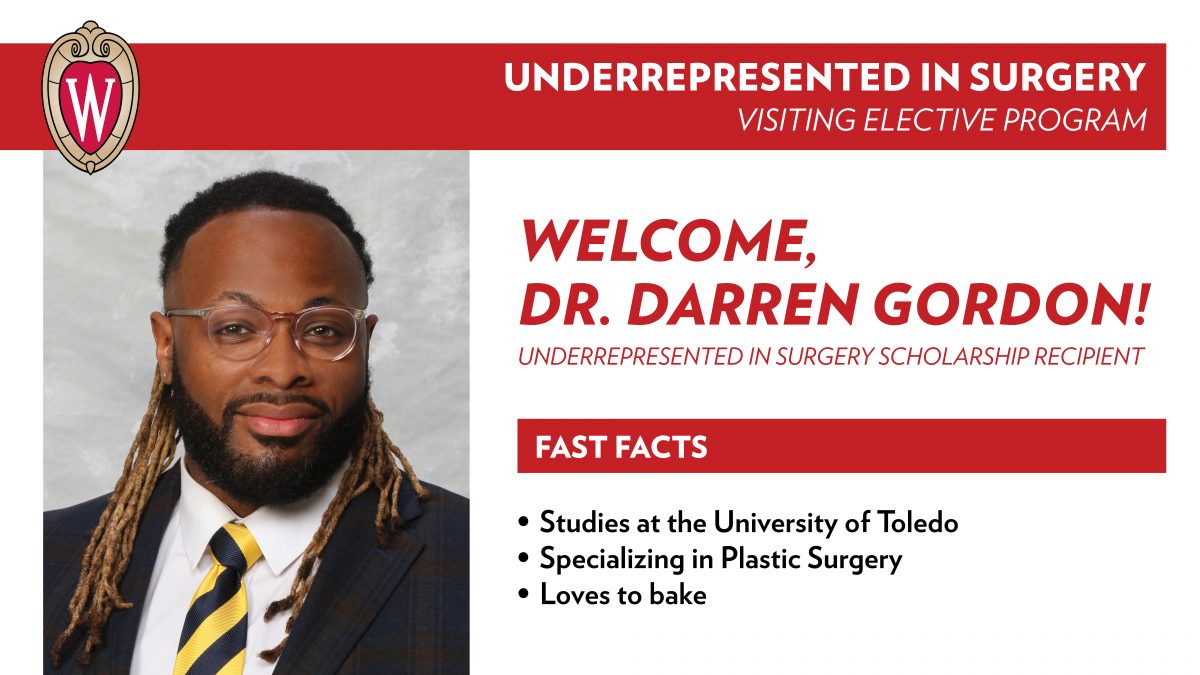 While Darren Gordon, PhD, was originally a stranger to the University of Wisconsin and the Plastic Surgery Division of Wisconsin Surgery, his rotation with the Wisconsin Department of Surgery through the Underrepresented in Surgery (URS) Visiting Elective Program has further cemented his ambitions for his professional and academic career.

“I wanted to be at the interface of technology and medicine,” Dr. Gordon said. He pointed out examples of African American men at this intersection that he had noticed from a young age, such as Cyborg from DC Comics, and said that he sought to embody that vision in the medical field. Originally, he was interested in neurosurgery, but saw that much of the cutting-edge innovation was happening in plastic surgery.

Dr. Gordon also has leadership and mentorship on his mind, both for other medical students and for communities. Alongside seeking to help underrepresented students achieve, he cites dismantling systemic issues such as unnecessary procedures and the spread of misinformation as work he wants to continue, having started it in his leadership roles with the Student National Medical Association, Phi Beta Sigma Fraternity, Inc. as well as other organizations.

Dr. Gordon is excited to be working with Samuel Poore, MD, as his rotation mentor, saying he admire Dr. Poore for his ability to balance clinical practice and research.

Across surgery, research and leadership, Dr. Gordon’s skillset is as wide as it is deep. But he’s not focused only on his profession: he’s also an adventurous baker and enjoys kayaking, saying he looks forward to getting out on Madison’s lakes. Before arriving, Dr. Gordon didn’t know much about the Department of Surgery or the city of Madison, but now that he is here, Dr. Gordon said his expectations have been exceeded.