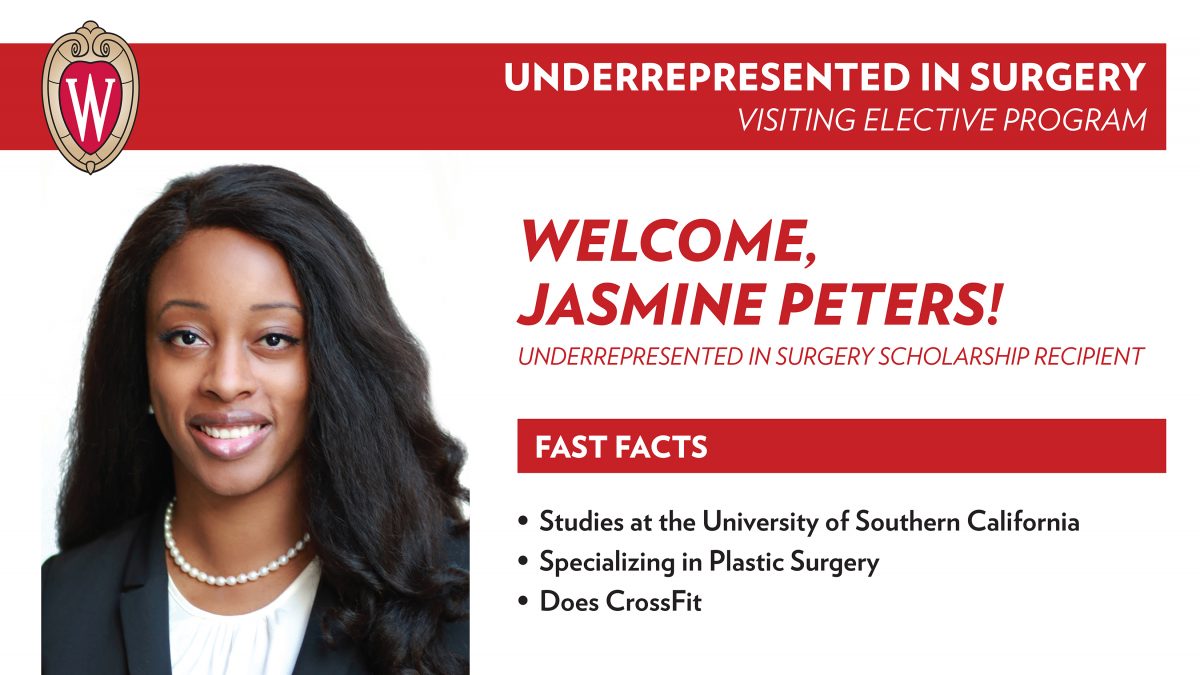 When Jasmine Peters, participant in the Underrepresented in Surgery (URS) Visiting Elective Program, thought about the experiences that inspired her medical career, multiple memories flashed through her mind. An extra level of care for others was the common link, both in the care she sees, and the care she seeks to give as a physician.

Peters named one instance where extra care made a significant difference during a rotation at her soon-to-be alma mater, the University of Southern California. A patient recovering from a breast reconstruction operation was frustrated and had not walked yet after the surgery. Peters visited her in between cases and a short check-in turned into an hour and a half discussion about the patient’s journey through cancer, reconstruction, and most importantly, healing. The patient resolved to improve, walk, and go home to her 3 daughters.

“It made me understand the impact that physicians have on patients,” Peters said. “Life-saving surgery is important, but we can’t stop there if we can offer patients the chance to improve their quality of life. It’s not enough to just be alive, but we want patients to live, too.”

During her two-week rotation with the Division of Plastic Surgery, she saw that extra level of care not only with patients, but in the care that faculty provided to students. She especially enjoyed working with Ahmed Afifi, MD, because of his ability to relate to residents in debriefs after cases. In addition, Peters hadn’t considered gender affirmation as part of her career, but that changed after working with Katherine Gast, MD, MS, on a vaginoplasty and admiring Dr. Gast’s foresight and efficiency.

After graduation, Peters hopes to continue chasing that extra level of care in and out of the OR. In May, she’ll earn both her MD and her MPH, with the goal of integrating the latter into her career “so policies can serve all of us, not just people in privileged spaces,” she said.

“We must take responsibility for each other and understand our connectedness,” Peters said. “I want to use my resources to give back and sway policy for a better quality of life for everyone.”

Even before medical school, she strived to achieve equity and eliminate disparities in healthcare: she was elected Fundraising Chair as a junior at The Ohio State University and continued her membership, rising to co-president of USC’s chapter of the Student National Medical Association. Her goals included improving access to medical school for people from underrepresented groups, supporting underserved communities, and coordinating fundraisers to support service efforts.

Balancing advocacy and clinical work is a demanding task, but Peters learned to do it with inspiration from her mother, who, as a single parent, raised Peters and her two brothers while attending graduate school. Now, herself a mother of two and in medical school, Peters said being a mother is a strength that taught her to handle competing responsibilities while ensuring the extra level of care stays a focus.

“Before motherhood, exams were my greatest fear,” she said. “After my first child had a stay in the NICU, I learned what truly mattered and gained the confidence to tackle all of medical school’s challenges as hurdles to overcome, not fears to drown in. I continue to do my best and discipline became easier when I realized there are people [inside and outside of my home] counting on my success.”