A futuristic bandage shown to heal a wound more than four times faster than a traditional dressing by using the body’s natural movement to generate an electric field is one step closer to being available at the corner pharmacy.

About three years ago, researchers in surgery and engineering at the University of Wisconsin-Madison first created and tested the bandage, finding that it significantly accelerated wound healing in rats. In September 2021, they published the results of their latest study in the Journal of Nanobiotechnology. 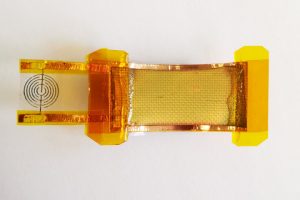 “The results from our original research were encouraging, but we needed to test whether the bandage would work on human skin,” said Angela Gibson, professor of surgery at UW–Madison and a burn surgeon and director of wound healing services at UW Health. “When we tested it on wounded human skin that we’d grafted onto a mouse, the wound healed completely in seven days compared to the typical 30 days using a standard dressing.”

The bandage works by using a tiny generator, called a nanogenerator, to capture energy from the body’s natural movements like breathing and twitching. The nanogenerator converts that energy into mild electric pulses that are sent to an electrode in the bandage, which then creates an electric field around the wound.

Previous attempts to use what’s called “electrostimulation” for wound healing, however, have been hampered by the need for bulky equipment and complex wiring. And the pulses created by such equipment can be too strong, damaging surrounding skin.

“The bandage tested in this study did not negatively affect the test animals in any way,” said Xudong Wang, professor of materials science and engineering at UW-Madison and a pioneer in creating materials that generate electricity from mechanical motion. “We also made improvements in the bandage between our original study and this one by incorporating the nanogenerator into the bandage itself, and by weaving the material to better mimic the way skin stretches so it could capture more of the energy from subtle body movements. We’re very excited about the results in human skin.”

Because the bandages are made of relatively inexpensive materials and are not complicated to make, the researchers expect they wouldn’t cost much more than a regular bandage.

The team says their next steps include improving the nanogenerator and bandage design further to harness energy at various sites on human bodies. They hope to move to clinical trials in the next few years, after testing on large animals for safety and effectiveness.

“Given the device’s simplicity and its expected low cost, we’re really hopeful that this technology will lead to significant improvements in treatment for the millions of people who suffer from wounds every year,” said Gibson.

This research is supported by the UW2020 program. Read about the 2018 study.

Read additional coverage of this story on WKOW.com and the UW School of Medicine and Public Health website.