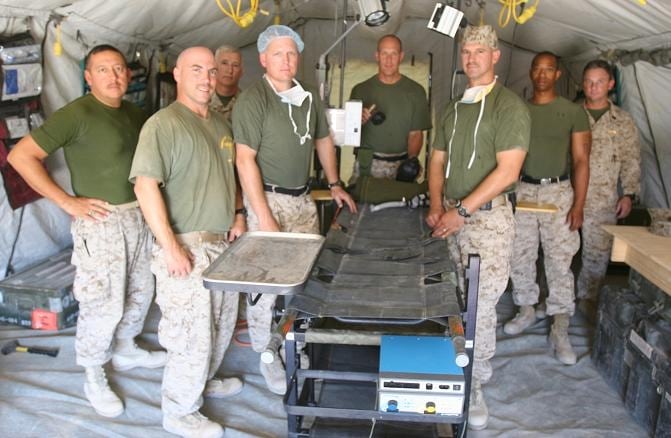 Dr. James Cole in Iraq (foreground, right side of table)

Dr. Cole is Clinical Assistant Professor in the Divisions of General Surgery, and the Trauma Medical Director at UW Health Surgery at SwedishAmerican. He has 24 years of military service, including three tours of duty in the combat zone. He served in tent facilities where he learned to “make do with just about anything, and how to think creatively and solve problems that we just never face in well-equipped hospitals in the U.S.”

Dr. Cole’s father served as a Navy Corpsman during the Korean War era, sparking an early interest in the Navy SEALS and Marines. Dr. Cole was fortunate to receive a Navy Health Professions Scholarship that paid for all his medical school tuition and expenses, and a stipend.

Among Dr. Cole’s many assignments, he served as the Officer in Charge of a mobile surgical team in Iraq (2007), and Marine Corps Forces Surgeon, responsible for the entire healthcare of the NATO coalition of the Southwest region of Afghanistan (2014)—the highest ranking and most senior position in the region.

These experiences shaped him as a leader: “On my last year-long deployment, I was in charge of all healthcare matters of a 35,000 coalition of troops from the US, the UK, Denmark, Jordan, the Republic of Georgia, Bosnia, and other nations. I oversaw all preventative medicine, primary care, trauma care, multiple hospitals, medical evacuation, and medical supplies. Every single major problem or issue eventually came to me. I was also in charge of building and equipping a trauma facility for the Afghans to use, and training members of the Afghan National Army how to care for trauma casualties. It was overwhelming, as if I was drinking from a fire hose. I now strive to apply all that I learned as a former combat surgeon and military leader into my current practice and leadership role.”