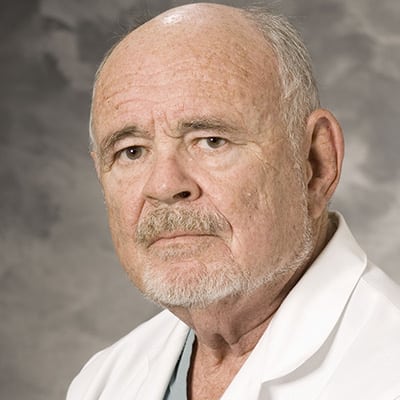 Plastic surgeon Dr. David Dibbell served in the US Air Force for 15 years, including time as Chief Surgeon of a hospital in Huế, Vietnam. Dr. Lee Faucher started his career in trauma care early, beginning as an EMT in high school. After joining the Air Force, his passion for medicine grew, leading to his current role as surgeon. After graduating from UW’s general surgery residency program, Dr. Kapur joined the Navy, where she is currently stationed at the Naval Health Clinic in New England.

What Dr. Kapur says she’s learned in her time with the Navy. Dr. David Foley is a transplant surgeon at the University of Wisconsin Department of Surgery, and has served in the US Army Reserves for 23 years. He has received numerous awards during his service.

Learn where Dr. Foley was deployed. Dr. James Brandenburg is Professor Emeritus in the Division of Otolaryngology at University of Wisconsin. He is a retired colonel with the United States Army.

Learn about his 35 years of service. Dr. James Cole served for 24 years. His service includes time as the Marine Corps Forces Surgeon for Southwest Afghanistan in 2014, where he oversaw healthcare for 35,000 troops.

How Dr. Cole’s military service shaped him as a surgeon.